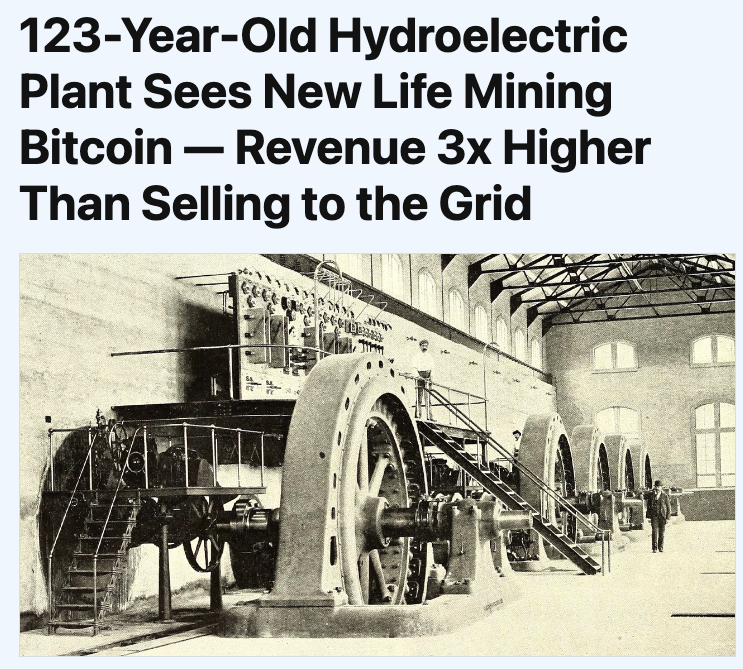 How does that make that energy viable? It’s being used only to mine not to the grid?

Besha (CEO of Albany Engineering Corp) said that he would have liked to sell the renewable energy to National Grid, but the multinational electricity and gas utility company reneged on an old agreement. AEC has had a long-running legal battle with National Grid who signed a contract with AEC in 1993. The deal was that the Mechanicville Hydroelectric Plant and AEC would sell power to National Grid priced just under the going market rates.

However, when Besha got the Mechanicville operation licensed, National Grid called the company and allegedly said: “We’re not going to honor this contract. And if you don’t like it, take it to the judge.” AEC got the plant 100% operational but Mechanicville’s local news reports note that the original 1800s machinery had a hard time maintaining a profit. That was until bitcoin mining changed the trend.

“It’s the best (type of bitcoin mining) because we’re using renewable energy. We’re just doing it on the side, experimenting with it. We’re buying used servers.”

They’re mining on the side with old rigs to keep energy production profitable.

The secondary benefits of Bitcoin mining is the biggest boon we have had for energy transition. It’s every energy producer’s wet dream.

Energy doesn’t magically appear from nowhere when demand spikes. There has to be a buyer of last resort for that energy to be viable. That’s Bitcoin mining. They’re super flexible and can turn on and off helping to upkeep a surplus for demand response. It’s working great for Texas.

As someone who has worked in the energy industry, anyone you ask in energy industry will tell you the biggest hindrance to renewable energy production is subsidizing cost of research, build out, operation. Bitcoin does this better than anything else. Every energy producer will become a Bitcoin miner. Every stranded energy will be directed to bitcoin to keep energy production cost low. It’s just common sense.

On top of this, Bitcoin is becoming a key player in the US to combat methane emissions in oil fields. Crusoe energy’s digital flare mitigation has been used to drastically reduce methane emissions by upto 98% in Texas, North Dakota and other states in the US. They’re taking it to 8 other countries now including middle east, Russia, Australia. How do you think Exxon was ranked in the sustainability index but Tesla wasn’t? Exxon mining bitcoin with flared gas to slash emissions. Read below.

Abu Dhabi and Oman sovereign wealth funds are investors in Crusoe energy as part of $350 million funding round last month. They have raised total $850 million from two rounds this year.

Traditional banking system consumes 56 times more energy than Bitcoin and US military is the world’s largest industrial pollutant. What for? To protect USD.

Bitcoin is obviously not comparable to old systems. We don’t need to justify Bitcoin energy consumption. First kill this type of mindset. Hard money has natural cost of production. Otherwise it won’t be hard money.

Bitcoin is global, borderless, no central authority, no counterparty risk, instantly teleportable physically settled bearer instrument for only a fraction of a cent cost. No middlemen, card company fees, bank fees. Scarcer than gold, easier to carry and spend than cash.

As if this wasn’t enough, Bitcoin environmental impact is actually frickin’ overwhelmingly positive. It’s so positive that we’re probably gonna get fcked by climate change unless we move to Bitcoin standard ASAP.